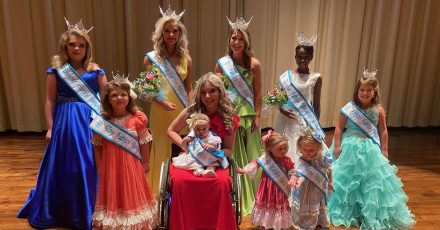 On September 26, the Miss Decatur County Pageant was held at the Kirbo Center, where contestants used the pageant as a platform to promote a benefit for Amelia McCullough, who sustained a spinal cord injury earlier this year.

Directed by Jessica Moye Thompson and emceed by reigning Miss Decatur County, Jacey Cox, contestants competed for the crown, along with the Heart of a Warrior Award and Hospitality Award.

The award was named in honor of McCullough, who demonstrated strength, perseverance and faith throughout her injury. It was awarded to the reigning Queen, Jimi Bellflower, who raised the most money for the fundraiser.

McCullough also awarded Maddie Chapman with the Miss Decatur County Hospitality Award, which is given to the contestant who raises the most money for the benefit and receives the People’s Choice Award.

Following the announcement of the specialty awards, the crowning for each age division began.

Baby Miss Runners up were Weslyn Lord and Laiklyn Keaton.

Additional awards for interview began in the Junior Miss Division.

For the final title, Maloree Inlow was crowned Miss Decatur County, Miss Photogenic and Miss Interview Winner, while Shelbie Stevens was named the Runner Up.

Thompson was proud of all the contestants and their efforts.

“We had 40 contestants, some of the most impressive young ladies of Decatur County and surrounding areas competing for the titles,” she said. “They displayed intelligence in verbal communication as well as style, poise and grace on the stage. I’m honored to have had the opportunity to work with each of them and their parents.”

Thompson also expressed her excitement to have McCullough back on the stage.

“Amelia was stunning and it was amazing to have her back on the Miss Decatur County stage,” she said.

The newly crowned queens will continue their fundraising efforts throughout their reign to help with Amelia’s recovery process.