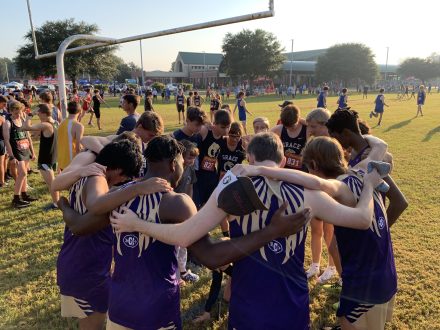 Above, the BHS and GCA XC teams prayed together before the Invitational.

This past weekend, the Grace Christian Academy and Bainbridge Bearcat cross country teams traveled to the Westover Invitational in Albany after Bainbridge Middle School and Spring Creek Charter Academy competed in the Thomas County Middle XC Invitational on Thursday.

BMS had two female runners place in the top 10 for the Girls’ two-mile run finals.

SCCA had two girls finish in the top 40.

GCA and BHS then headed off to Westover on Saturday.

Watts was reportedly not pleased with his time, but is looking forward to racing this same course at district.

The Bearcats will now host the Bearcat Invitational on Saturday, while the GCA Middle School xc team will travel to Fayetteville for the GAPPS state meet.

There, Elrod is expected to have a good bit of competition. He placed 8th last year and four of the boys that beat him in last year’s race are set to run again.

The Lady Cats Softball team took on the Thomasville Lady Bulldogs for senior night on Wednesday, where they won 10-7.... read more