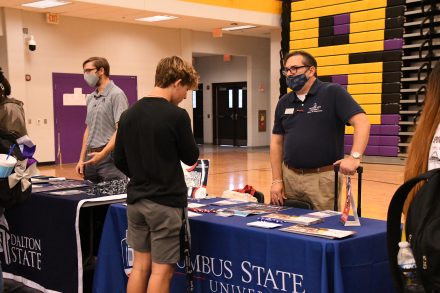 A Bainbridge High School junior talks to a representative from Columbus State University at the Probe College Fair on Tuesday.

Bainbridge High School Juniors and Seniors had the opportunity to hear from multiple different college recruiters on Tuesday morning, when the Probe College Fair visited the high school.

The Probe College Fair is one of the top ways for representatives to connect with Georgia High School students and their families. Additionally, it is a great opportunity to introduce students to colleges of different sizes.

Junior Taryn Powell was one of the students who visited the Probe College Fair and spoke to some of the smaller schools in attendance.

“I talked to Toccoa Falls,” she said. “I got something in the mail from them and it peaked my interest because it was a Christian University.”

Toccoa Falls College is a private college that has an undergrad enrollment of 884.

While Powell talked to some smaller schools, she also checked out the likes of Ole Miss and Troy University.

“I was really open to everybody,” she said. “I know what I want to major in, but I think it’s important to pick a school that has a large variety of choices in case you switch while you are there.”

Powell said the fair really allowed her to open her eyes to schools she would not have been able to visit, due to them being out of state.

One of the schools at the Probe College Fair that received a lot of attention was Middle Georgia State University.

“Many of the students were interested in aviation and nursing,” Recruiter Kori Johnson said. “Aviation is very popular, considering we are one of the only aviation schools in the state.”

Johnson said she had a mixture of students visit her station; some who were hearing about the college for the first time, while others had family members who had attended there.

“The fair really helps our school and helps us get the word out about our open houses and showcases all of our majors,” she concluded.

“It’s been going very well,” she said. “The students seem very prepared and we’ve had a lot interest in the Oconee campus and have had a lot of interest from the JROTC program because we are a senior military college.”

Senior Skylar Jones said that being able to see all these schools opened the door for more opportunities than he expected.

He was able to talk with University of Tennessee and Emmanuel College, who he said really interested him, as he wants to pursue a degree in Pharmacy.

“It was overall a great experience and I hope to be able to follow up with them,” he concluded.

For BHS students who weren’t able to attend the fair due to being sick or for those who are interested, the Probe College Fair will offer a virtual fair on October 13 from 5 p.m. to 8 p.m.

Members of the Bainbridge Chamber of Commerce gathered at 113 S Broad St this past Friday for the ribbon cutting... read more